Living in the Maniototo

Janet Frame’s novels and autobiography capture an artistic sensibility attuned to the vulnerability and yet resilience of our world and humanity in the 20th century. This excerpt from her 1979 novel Living in the Maniototo also manages to weave the cultural value of woollen blankets to New Zealanders into the text. Published by Virago Modern Classics, Hachette, London 2009 (Introduced by Linda Grant) © Janet Frame Literary Trust

Here, I thought, if one were a spirit or dead, is a sanctuary. With a sudden rush of wind, dead leaves, twigs and a scrap of paper blew inside. The air of desolation and neglect increased: the chill, of the wind, and of the spirit, intensified and there was a kind of peace that one feels walking among the dead and listening, as the dead may, at a great distance from the world and its movement and noise.

I went to explore the small garden and found a green garden seat which I cleared, brushing away the bruised ripe loquats fallen everywhere from the huge loquat tree; and I lay down, half in sun, half in shadow, looking up at the lemon tree in the neighbouring garden of the Villa Florita. I closed my eyes. The sun came out again, moving quickly, and was on my face, burning. I changed my position on the seat. The sun was once again hidden behind cloud, the air was chill again, the flax rustled with a brittle snapping sound and the secretive small birds once again began their whispering and chittering. I fell alseep. And when I woke I shivered with cold. The mountains were harsh and grey with fallen used daylight, softened in the crevices with the blue of distance and evening.

So that was the Rose Hurndell Room! I dreamed of it, and of my own home in Bannockburn Road, Blenheim, and the two lives I had known there, and the daily use which marriage makes, one of the other, as the light makes of the twin slopes of the mountain, and I was glad that the colour of distance was beginning to touch my view of my life in Bannockburn Road. I dreamed of Brian’s house in Baltimore, and of the front window massed with plants. And of my home in Stratford, once again near the railway line and the bracken, with the hay-fever trees, white blossoming, growing everywhere, and the light green pine mysteriously transplanted from some Spanish island, growing in the front garden. Finally, in that disturbed night, when I was partly awake and partly alseep, I thought of the blankets.

Unlike the deal tables of fiction and the drain-layer and French master, the debt collector, the inhabitants of Blenheim, of Baltimore, of Berkeley, and I as other than Violet Pansy Proudlock, ventriloquist or gossiping Alice Thumb, a secret-sharer of limited imagining, the blankets were real, with real history and real power of warming. I thought of those in my home in New Zealand, gathered from many places, from our old home in the south, from my parents’ bed – coarse blankets matted with being washed and almost threadbare in places, faded from white to yellow with age and sun and hanging year after year on the clothesline, strung between two appletrees, tautened and lifted into the arms of the wind by the manuka clothes-prop, returning to sag and swing close to the earth with the weight of the wetness. Their brand names were marked in the corners. Some were English – Wilton – a name I had heard spoken with the reverence obviously due to it; others, with names that caused a shiver of homesickness, a memory of school days when places became their products – Onehunga, Mosgiel, Kaiapoi: the places with the woollen mills and therefore the blankets. I remember my mother looking out at the fluffy-clouded sky with its patches of pale blue, saying, ‘It’s blanket weather.’  That meant washing. The washing was a remembered ritual and risk. The women’s magazines printed regularly long serious articles with such titles as , ‘Dare I Wash My Woollen Blankets?’ and ‘The Risk of Washing Woollen Blankets’, sometimes pages of “Hints on Washing Woollen Blankets.’

Blankets in their washing and drying were part of the poetry of the outside world and its weather. ‘The white sheet bleaching on the hedge, With Heigh, the sweet birds how they sing.’

It seemed that, among all the products of the earth, wool was the most important, especially when our early education dealt largely with products, with the implication that living depended less upon the heartbeat and import and export of breath than upon the import and export of products: wool, butter, mutton. In recent years there was even a prime minister who came from the home of blankets – Kaiapoi, and brought, naturally, a new share of warmth and compassion to the nation. How could he help it, coming from Kaiapoi?

But the price of wool! The cost of the warmth has always been too great. I know, who live outside fiction where the cold wind blows across the waste spaces from heart to heart.

Finally, I dreamed of the Garrett’s golden blanket which everyone had wanted, I knew. I knew just as surely that it was mine, that it would take it’s place among the other treasured blankets in my home – that grey pair which I bought one week in a silverfish- and ant-infested seaside bach in the north, the relic of a cold wet summer, when Lewis was alive, and the children were small, and we all lay shivering in our dripping hammocky beds, and the manuka and the sea outside were full of misty rain. And there was the purple blanket that was returned to me when the writer that I met on my first visit to New York died suddenly. I gave it to her after I had stayed in her apartment, but after she moved from there, something happened, she couldn’t find enough warmth, though the world was crying out for warmth and wool, and so, they told me, she stayed all day in her new apartment with the curtains drawn, the radio playing the Black Power station (in the days when black Americans, flying to San Francisco, could still be paged, unthinkingly, to ‘come to the white courtesy telephone’), and with bottles of tranquilisers and fuming low-calorie sodas ranged along the windowsills. Beatrice, married at sixteen, divorced, a daughter at college. Beatrice, writing her novel, playing her music, perpetually depressed. They found her body in the East River. The purple blanket might have warmed her, but in the end there was no room left in her hibernating, winter heart for further cold seasons. Yes, her purple blanket is now safe at my home in Taranaki, with the other relics of warmth. And soon the gold blanket will be there too, I thought. I’m sure I smiled in my sleep realising that I had won the gold blanket from the guests; unfairly, perhaps, but the price of warmth is often too high for too close a scrutiny of the means of getting it.

Thanks to Pamela Gordon and the Janet Frame Literary Estate.

Janet Frame (1924-2004) came from a poor background at a fortunate time in New Zealand history when she was able to obtain a good education and make her dream of becoming a writer come true. Despite her international literary fame, she never turned her back on her working class roots. She was accomplished at handiwork and especially liked to crochet bright multi-coloured woollen hats and blankets. Many of Frame’s books are still in print worldwide: her poetry, non-fiction, novels and stories are all available through good booksellers. 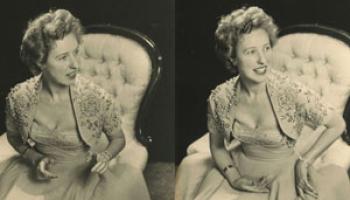 Mary Annette Hay The Miracle of Wool
by Claire Regnault
Affectionately dubbed 'the Queen of Wool' and the creator of marvellous wool fashion spectacles in the 1950s. 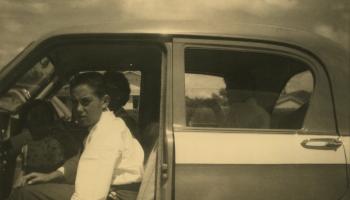 Hard Wired to the Whenua
In conversation with Mavis Mullins
A life epitomising the meaning of turangawaewae - knowing and, being strongly connected to one's place of origin. 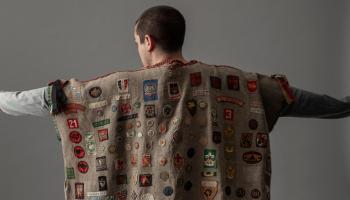 Belonging & Longing
Hamish Coney
As a young boy I was dragooned into that arcane twilight of empire experience that was cubs and scouts.